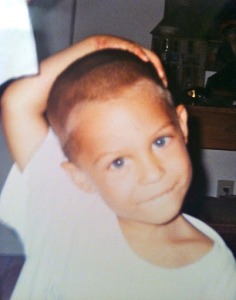 When Roberto was born, his head was perfectly shaped. Perfectly proportioned. With perfectly placed facial features. He was, in my opinion, a natural born attention-getter.

When he was a very young boy, Roberto was guaranteed to hear how beautiful his big blue eyes were. How cute he was. Yet, I made sure to counter-comment, after he would thank them for the compliment, with an observation of my own.

You see, as far as I was concerned, and what I’ve wanted Roberto to embrace was that more than his good looks, concern for humanity should be a top priority, along with respect for others.

No longer a very young boy, Roberto is now a young adult, and his handsome features have not wavered, and neither has his appreciation of human life, and accepting people for who they are. As has always been important to me, Roberto also believes everyone should live their own life, in the way they chose, as long as they are not harming themselves, or more importantly, not hurting anyone else.

Roberto is what many call the life of the party. The person you can count on to bring happiness to any situation. A true, loyal friend. Someone dedicated to improving his own life, while enhancing the lives of others. He’s respectful, complete with morals and values. A well-rounded human being. Someone who will bend down and look a child in the eyes when talking to him or her. He will listen, with enthusiasm, to an elderly person, gaining valuable insight from the life of someone who has a story to tell, memories of long ago. Roberto enjoys the company of family, as much as he does his connection with friends.

As his mom, I am impressed and proud of the open-minded person he is. So, when he told me, with no fear of rejection, that he is gay, I warmly welcomed him into my embrace, because of the young man I know him to be, and because of the love he shares willingly, without conditions.